A Perfect Balance of Craft With Science

Thanjavur Bommai originated in Thanjavur, an ancient capital of the mighty Cholas and its history dates back to time immemorial even more ancient than the Greek and Roman history. This city was earlier known as Tanjore. It is now the district head quarters of the Thanjavur in the state of Tamilnadu in India and is known as the rice bowl of South India. 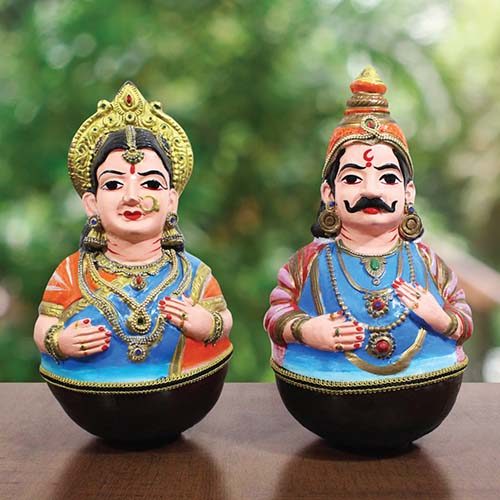 During the l6th Century, Thanjavur was ruled by Nayaks, who were the contemporary of Queen Elizabeth – I, in whose reign, Sir Issac Newton had made it known the force of gravity, through an act of serendipity, involving falling apple. Even before the advent of Nayaks, Thanjavur Dolls were being made in the Tanjore. It shows and makes abundantly clear that, the makers of Tanjore Dolls are more scientifically enlightened than the English and in particular Newton, even before their scientific era. The scientific temper of Tamilians was at its height during and aftermath of the Chola Empire and are the product of that era of enlightenment.

The globally acclaimed Tanjore Bommai are made with plaster of Paris, Wood pulp and, of course, the clay, obtained on the river banks of Cauvery. The Tanjore Bommai, which are produced based on gravitational force, used to be produced in pairs i.e… Raja and Rani. Generally, women folk are involved in the making of Thanjavur Dolls. 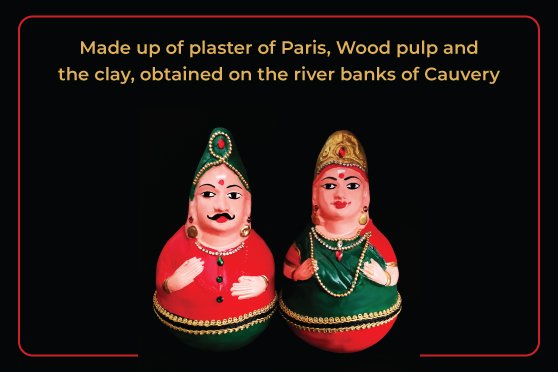 The plaster of Paris is ground well. The plaster of Paris and Paper (Wood) pulp are immersed in the ratio of 1:3 along with the required tuber flour (Sago) and they are bundled into dough like a “poori” flour. The same is put in the dye, meant for producing patterns. The dye-cast figurine is let to dry in shade for half an hour. Later on, the dye cast figurine is affixed with papers and let to try for 1 1/2 hours.

It takes almost a week to produce a Thanjavur Doll. The Tanjore Dolls are sold out at the entrance of the Big Temple, Tanjore. In fact, a visit to a big temple is not said to be fulfilled without ever buying a Tanjore doll. These dolls can be used to decorate the house or give away as gifts and are mostly used as children’s toys. Thanjavur Bommai Price varies depending upon the size of the doll.

The center of gravity and total weight of the Thanjavur Doll is concentrated at its bottom-most point, generating a dance-like continuous movement with slow oscillations. The Tanjore Dolls are done only in Raja – Rani pair and in no other motifs the dolls are ever made into.

When we force the Dolls to lay on the ground, they will be defiant and stand erect. This is an artistic feature which is a subject of surprise. The Tanjore Dolls are said to be attracted the attention of children worldwide, for it comes to be static, when a mischievous child tries to push it, to make it flat.

Thanjavur Dolls are the unique creations of artisans, living around Tanjore incorporating the concept of the gravitational force, even before and in fact very earlier than the period of discovery made by Sir Issac Newton. These are not just a combination of Pulp and Clay, it is Ancient Science.

The alluvial soil and clay obtained from the bank of River Cauvery enhances the utility value of Thanjavur Dolls to a greater extent and it serves as a weight to pull the dolls to stand erect when we force the dolls to lay on the ground. Although the Original Maker of the Thanjavur doll remains hidden in mystery, it is the people of Thanjavur who kept the craft alive for centuries and is definitely the most deserved handicraft product allocated with prestigious GI Tagged Status.

Although the Original Maker of the Thanjavur doll remains hidden in mystery, it is the people of Thanjavur who kept the craft alive for centuries and is definitely the most deserved handicraft product allocated with prestigious GI Tagged Status.