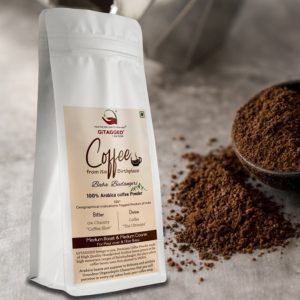 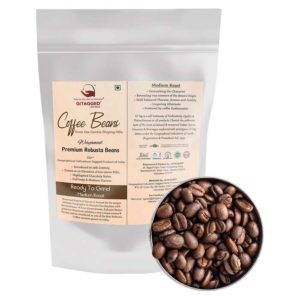 Period of Origin : 1600 – 1700
Bababudan Giri Arabica Beans are Superior to other Arabica & Robusta varieties and Exhibits Grandeur Organoleptic Characters that you will Perceive in every Sip taken from your Coffee Mug. Free Chicory (15gm x 5)
Bababudangiri Arabica Beans Uniqueness

Buy Unlimited Groceries Shipped at ₹80
Buy any or all Spices and Groceries of unlimited Quantity, Delivered at Flat ₹80 across India
Available for Express Store Pickup!

Can’t wait for your order?
Get it early! Quick Pickup Available at our store – HSR Layout, Bengaluru. Get Directions

Coffee made of Arabica Roasted Beans is the world’s most popular and preferred coffee. Bababudan Giri is the Birthplace of India’s Coffee. The Bababudan giri Arabica coffee beans is known across the world as one of the premium coffee varieties.  In 17th Century, a Muhammadan Pilgrim named Baba Budan who on his return from Mecca Brought 7 coffee Berries and planted them near his hut located on the high mountain range, now named after him as Baba Budangiri.

In those days it was illegal to take coffee beans out of Arabia and they were extremely protective about their coffee industry but Baba Budan enjoyed the coffee so much  that, he decided to bring back berries with him from port of Mocha, Yemen. After returning, he planted seven seeds of coffee beans in the High mountain Ranges of Chikmagalur, Karnataka and thus became the birthplace of coffee in India, now famously named after him as Bababudangiri (Giri=Mountain in Kannada) in his honor.

Bababudan Giri  Arabica Roasted Coffee Beans exhibits Grandeur Organoleptic Characters when compared to all other Arabica and Robusta coffee varieties grown in India, that which  you will Perceive in every Sip.

NOTE: Arabica Beans Grown at Baba Budangiri Mountain Range has been Conferred with the Prestigious GI Tag in the Year 2019 as 355th GI Tagged Product of India.

(For Bulk inquiries, mail us at [email protected] )